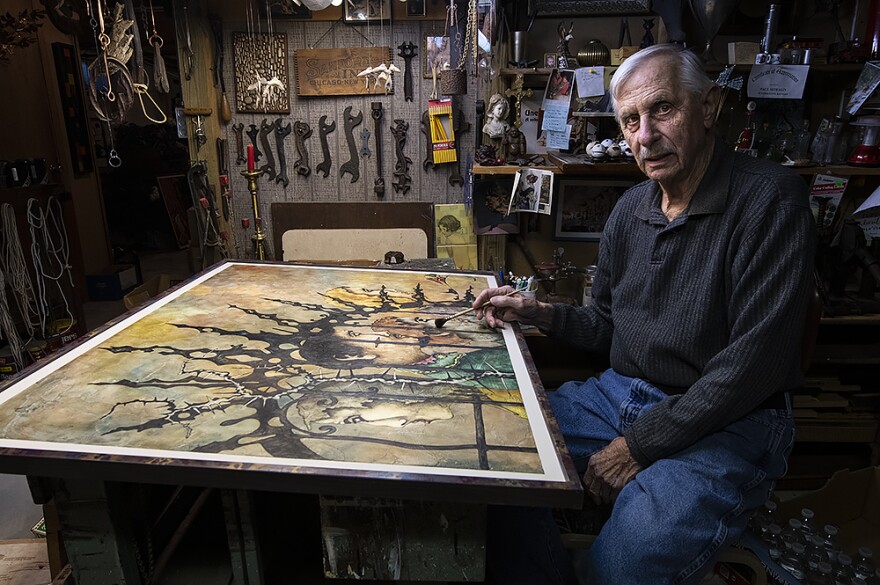 Born in 1930, Paul Seiwald created mainly for his own satisfaction and his paintings were either given away to friends and family or stored away in his basement as soon as they were completed.

A self taught artist, Paul completed over 300 paintings and sculptures throughout his life. His style of painting has been compared to Thomas Hart Benton, Salvador Dali and Dr. Seuss.

His first attempt at painting was a paint-by-number kit but over the years, he carefully observed the techniques of artists he admired most, Klimt, Matisse, and Thomas Hart Benton.

Instead of painting on canvas, he painted on plywood panels prepared and textured with wood putty. He also created the frames for his paintings.

Other notable subjects are portraits of mysterious rural people involved in courtship, progeny and conflict. Characters are often portrayed with what appears to be mascara running from their eyes and streaming down their faces - this may represent dirt and sweat streaks but it also might be a deliberate stylistic embellishment. Some characters are surrounded by thorny plants or depicted with thorns growing from their fingertips. Other characters are portrayed with prosthetic or artificial body parts. Many of the elaborate costumes the characters are wearing appear to be based in fantasy and not reality.

Some of his paintings feature recurring characters that appear in various stages of life - most notable is a striking blond woman and a boyish man with brown hair. Seiwald's brother, Dee, and daughter, Karen, say the characters in his paintings are not self-portraits and they do not represent anyone from his real life.

Though Paul no longer remembers the meaning behind his paintings, the titles provide clues that frequently result in an "ah-ha" moment - examples of this include the paintings entitled "PUSH", "COED", "GIFT OF SELF", "GIFT OF SELF - 4" and "GATEPOST USA". Sometimes the barns in his paintings seem to represent a place his characters could go to for a romantic "hideaway". At other times, they seem to be playing silent witness to the events in the painting. The painting entitled "WHOT?" features a derelict barn with disquieting eyes peering out from within but who (or whot) the eyes belong to is not clear.

Several paintings have religious themes or have titles that invoke religious meaning.

Seiwald retired from a career as a research chemist at Midwest Research Institute in 1983 and moved with his wife to a small farm in Vermillion, Kansas. He now resides in a care facility just a few miles from his farm. He no longer paints.

Paul Seiwald was born January 7th, 1930 in Eudora, Kansas. In the 1950s, he enlisted in the United States Army where he achieved the rank of sergeant and was awarded two Bronze Stars during the Korean War.